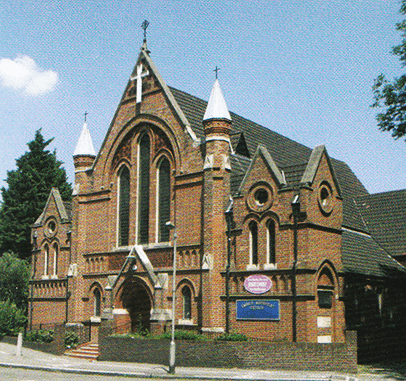 The Norwood and Newton Settlements were founded by Mr and Mrs Thomas England of Romford who were life-long Methodists and very generous benefactors.

Mr England, a pharmacist, moved to Romford from Yorkshire to be an assistant in a chemists shop.  He later bought the shop.  It was in Romford that he met and married Esther.  He was a member of Romford Council, serving as Chairman in 1921 – 22, where his advice on land deals was still bearing fruit 50 years later.

The bulk of the Englands’ assets came from the proceeds of the sale of land bought with far-sight early in the 20th century and it was said at one time that Tommy England owned half of Romford and would have been a millionaire (in the early 1900s) if he had kept it all himself.  But he believed that his assets should be used for the good of others and he gave away money for good causes as well as land for parks, scout halls and new church buildings among many others.

Thomas England was a private man who did not seek praise for his good works.  Many that he helped never knew who their benefactor was.

At the end of the 1940s Thomas and Esther “retired” to Clacton, while retaining their close connections with Romford.  Thomas England formed The Norwood Settlement in 1952 and, following his death in 1960, his wife, Esther, formed The Newton Settlement.  Still shunning the limelight, the Settlements were named after the maiden names of the mothers of the respective founders.  Mrs England died in the summer of 1985, still alert in mind, a few weeks short of her 99th birthday.  Having no children, the bulk of the Englands’ estate was left to The Methodist Home Mission, The Methodist Missionary Society, The United Society for Christian Literature, The Foreign Bible Society and The Salvation Army.

The assets of The Norwood and Newton Settlements, originally a mixture of cash, investments and parcels of land were liquidated and are now invested in various Common Investment Funds specifically for Charities.  The Settlements were amalgamated in 1996 and currently administered by five Trustees (who are all committed Christians).  We do not fund-raise but distribute the income from the investments.  We award grants, mostly, to mainline Free Churches in England and Wales to help with building schemes that seek to improve the worship, service, mission and growth of the Church, and also some local charities.